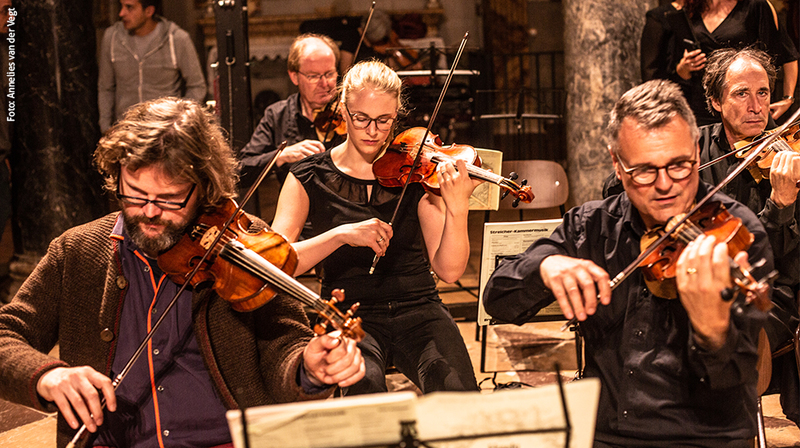 On the program are the following pieces

Mendelssohn - Symphony no. 1 in C for string orchestra

Mendelssohn - Symphony no. 10 in b for string orchestra

Orchestra of the Eighteenth Century

The Orchestra of the Eighteenth Century at its best! "With strings like a sonorous roaring engine, sharp accents and above all a lot of life", NRC Handelsblad writes enthusiastically about this Dutch top orchestra. In 1981, recorder player and conductor Frans Brüggen founded the successful ensemble, which quickly grew to the international top. In years that followed, the Orchestra of the Eighteenth Century won several prizes. In 2010 the orchestra was awarded the Prince Bernhard Culture Fund Prize. In 2018 the VSCD prize 'De Ovatie' was awarded to the orchestra. Although Frans Brüggen died in 2014, his musical legacy is still very much alive. Conducted by the Belgian cellist Roel Dieltiens, the Orchestra of the Eighteenth Century will travel throughout the Netherlands in 2019. The Edesche Concert Hall represents the province of Gelderland during this 'Grand Tour'. Come and listen!

"A phenomenal Belgian baroque cellist" writes Classical Affairs about Roel Dieltiens. He learned the trade from legendary cello greats such as Pierre Fournier and André Navarra. A virtuoso is Dieltiens for sure, but only when the music asks for it. At the same time he caresses the ear, without becoming sentimental. In short, the perfect ingredients for an unforgettable performance of two of Carl Philipp Emanuel Bach's most beautiful cello concerts.

Like father like son? Carl Philipp Emanuel Bach thought very differently. This second son of the great Johann Sebastian took other paths than his father. Rather Carl Philipp Emanuel sought it with his music in strong emotions than in the curly baroque of his time. This resulted in heavy pieces full of unexpected twists and moving melodies. Father Bach could be proud of his son. Carl Philipp Emanuel became the court composer of Frederick the Great, one of the most famous monarchs of the eighteenth century. Undoubtedly Carl Philipp Emanuel's cello concerts sounded beautiful in the showrooms of Potsdam, this monarch's equally famous palace. In the sublime acoustics of the Edesche Concert Hall it will be the same

It will only happen to you that as a twelve-year-old boy of your father you will have a whole orchestra at your disposal. It happened to the young and extremely gifted Felix Mendelssohn. At the age of nine he gave his first public concert and not much later he composed his first symphonies. Thanks to his house orchestra, Mendelssohn was able to try out his pieces straight away, before performing them during cosy music evenings for local musicians and friends of his parents. Mendelssohn wrote twelve such symphonies, all of which are different. In the Edesche Concert Hall, the Orchestra of the Eighteenth Century will take you from one surprise to the next with Mendelssohn's First and Tenth Symphonies.

The world-famous Dutch top orchestra Orchestra of the Eighteenth Century is coming to the Edesche Concert Hall. Journey to the eighteenth century together with the fabulous Belgian baroque cellist Roel Dieltiens. In the unprecedentedly luxurious surroundings of King Frederick the Great, the most beautiful cello concerts, such as those of Carl Philipp Emanuel Bach, sounded. From the living room of the 12-year-old prodigy Felix Mendelssohn his First and Tenth Symphonies for string orchestra sound, which he wrote at the age of twelve. Imagine an evening in the eighteenth century and come and listen!