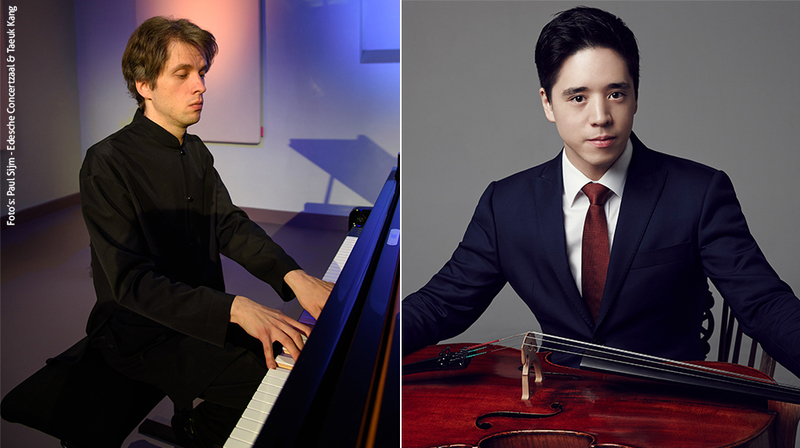 Together with cellist Isang Enders, Severin von Eckardstein starts his artist in residency at the Edesche Concert Hall. "It is a great privilege to be able to program my own preferences," says Severin enthusiastically. That is why this fabulous winner of the Queen Elisabeth Competition 2003 is pleased to open the new season with heartwarming cello sonatas by Beethoven, Mendelssohn and Prokofiev. Severin and Isang also perform solo with music by Nikolaj Medtner and Charlotte Bray

Few pieces start with such an exuberant mood as Mendelssohn's Second Cello Sonata. Both instruments compete with each other, with one and then the other taking the lead. Everything that makes Mendelssohn's music so unique is in his Second Cello Sonata, ranging from exuberant joy to lilting melodies. The piece is summarized in three soundbites: cheerful, sunny and with a touch of temperament

In his only Cello Sonata Prokofiev sets a different tone than Mendelssohn. Sun and summer make way for the musings of autumn. Prokofiev puts a lot of effort in the dark timbres of the cello. Prokofiev didn't have much to be optimistic about. He wrote his Cello Sonata in 1949, the time when the Soviet Union was subject to heavy censorship and he himself was accused of Western sympathies by the Communist Party. Prokofiev wasn't even sure if his piece would ever sound in public. It happened anyway. The legendary cellist Mstislav Rostropovich and pianist Sviatoslav Richter played Prokofiev's Cello Sonata for the first time on March 1, 1950 in a frenzied hall

Severin von Eckardstein about what he wants to achieve at a concert:
"I hope to touch the audience with my journey through music. That, when I play, I tell people my story, especially during the more personal and intimate moments of a particular piece. I want to take people through breathtaking musical landscapes; maybe bring back forgotten experiences."
(Read the interview with Severin von Eckardstein.)

To be able to compose convincingly for cello you have to come from a good home. After Bach, Beethoven was one of the first to write serious solo works for the cello. Indeed, with his five cello sonatas Beethoven set the tone for almost every composer after him, including Mendelssohn and Prokofiev. In his Third Cello Sonata, Beethoven treats the cello and the piano as equal partners, although the cello does have a small indent here and there. The sonata begins with a short lilting solo for the cello

Artist in residence Severin von Eckardstein experiences every concert as an adventurous journey. "I want to take people through breathtaking musical landscapes and bring out perhaps forgotten experiences," says the master pianist. Bring back such a forgotten memory with the cello sonatas by Beethoven, Mendelssohn and Prokofiev, or the fairytale 'Märchenbilder' by Severin's musical hero Nikolaj Medtner. Severin von Eckardstein and cellist Isang Enders will give you a special adventurous journey at the beginning of the new season.