The ear of Rembrandt - Music from Rembrandt's time - Camerata Trajectina 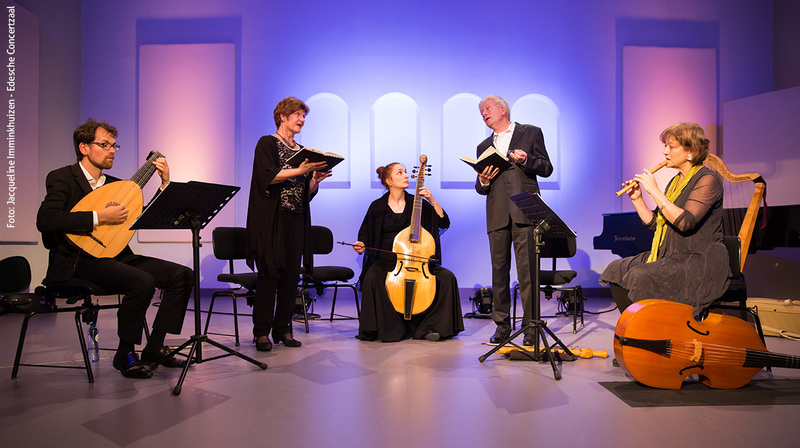 The ear of Rembrandt

Nobody can get around Rembrandt this year. In 2019 it will be exactly 350 years ago that this famous painter died. Camerata Trajectina paints a musical portrait of Rembrandt herself. What was he listening to while he was painting? Were they familiar tunes on the carillon of the Amsterdam Zuiderkerk? Was it the ear-wrenching music of his fellow townsman Sweelinck? Camerata Trajectina takes you into the musical world of Holland's greatest painter of all time.

"You can't get any closer to Rembrandt," says Camerata Trajectina. A unique opportunity to listen to music that Rembrandt probably heard himself. A colourful collection of songs, poems, paintings and tunes from Rembrandt's immediate surroundings passes by. Songs by Samuel van Hoogstraten, Catharina Verwers, Salomon de Bray and Karel van Mander, among others. Coryphées such as Joost van den Vondel, Constantijn Huygens and Jan Pieterszoon Sweelinck will also pass by. And, of course, pictures of Rembrandt's paintings are not missing.

Camerata Trajectina has been a warm advocate of Dutch music from the Middle Ages to the Golden Age for over forty years. The ensemble was awarded the Visser Neerlandia Cultuurprijs for this in 2014. The ensemble's greatest asset is its unique combination of intensive scientific research and spontaneous performances. The ensemble participated in numerous editions of the Holland Early Music Festival Utrecht, gave hundreds of concerts in the Netherlands and Flanders, and toured Europe and beyond. The ensemble regularly listened to national commemorations, such as those of the Union of Utrecht (1979), Willem van Oranje (1984), Constantijn Huygens (1987), the Peace of Münster (1998) and the Calvijn Year (2009).

Everyone knows Rembrandt as a painter, but what do you know about his musical preferences? What music did Rembrandt listen to? Camerata Trajectina gives the answer and is your guide through the musical world of Holland's greatest painter. The popular tunes of his time pass by, as well as the sensitive music of his fellow townsman Sweelinck. And who knows, Rembrandt might have been shaking his belly with laughter at the farces of Harmenz Krul. With Camerata Trajectina you listen to music that Rembrandt probably heard himself. "You can't get any closer to Rembrandt."