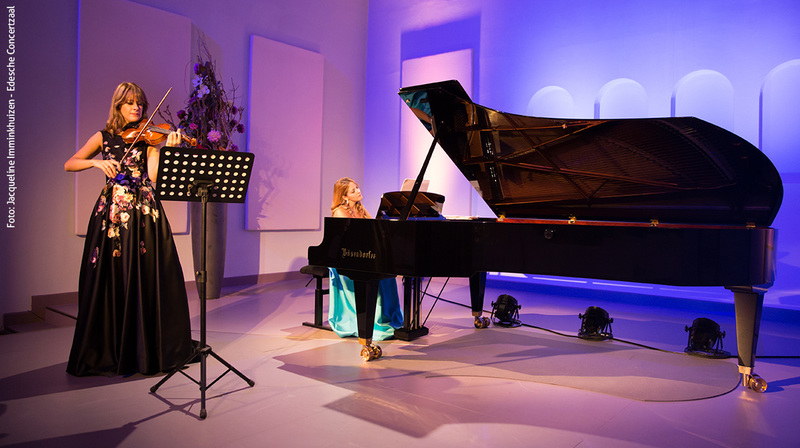 Violinist Francesca Dego and pianist Francesca Leonardi have formed a golden duo for almost fifteen years. They played together for the first time when they were still at the conservatory, and continued to do so. "There was an instant click. We have the same approach to rehearsing and interpreting music. That's very important, because as a duo you work closely together day after day", says Francesca Dego about her collaboration with Francesca Leonardi.

They have also more than earned their spurs independently of each other. Diplomas in Milan and London, a contract with the prestigious Deutsche Grammophon record label, several acclaimed albums, performances with prominent orchestras: violinist Francesca Dego (1989) has achieved staggeringly much for her age. No wonder that everywhere she plays, people barely talk about her beautiful sound, her compelling performance and her perfect technique. This is partly due to the beautiful instruments she plays, an ex-Ricci Guarneri del Gesù from 1734 and the Francesco Ruggeri from 1697.

"Accurate" and "crystal clear": these are striking features that the Italian press attributes to Francesca Leonardi's beautiful piano playing. This is more than justified, because Francesca Leonardi is one of the greatest Italian pianists of her generation. She has won fourteen first prizes at national and international competitions. The general public got to know Francesca Leonardi during the 2014 World Cup, when she played during the opening ceremony in Theatro Municipal of Rio de Janeiro.

In the Edesche Concert Hall, Francesca Dego and Francesca Leonardi share their musical passion for the romantic violin sonatas of Beethoven, Schumann and their compatriot Ottorino Respighi. It is music full of warm-blooded melodies and long lines. In Karol Szymanowski's famous Paganini Capriccio both Francesca's push the limits of their technical mastery. Fireworks insured!

Violinist Francesca Dego and pianist Francesca Leonardi form a dream combination and you can hear that in their extremely fine ensemble playing. In the Edesche Concert Hall they share their passion for romantic violin sonatas by Beethoven and Schumann. In music by their compatriot Ottorino Respighi and Karol Szymanowski's famous Paganini Capriccio the warmth of the Italian sun breaks through. Experience a wonderful sequel to their Dutch debut in the Edesche Concert Hall