A sampling of the program:

You may know Izhar Elias from the 2016 Kings Day Concert when he was featured live on television with Rodrigo's Concierto de Aranjuez. Izhar Elias is one of the most versatile Dutch guitarists. Just as easily he takes you more to the world of early music with his baroque guitar and then brings to life sizzling Spain with the modern guitar. What he finds so appealing about the guitar? "It is such a sensitive instrument, the sound touched me immediately. Moreover, the instrument is flexible in all kinds of styles. Just like the piano, you can play the melody and the accompaniment simultaneously, and it is also a very rhythmic instrument. All these characteristics can be heard in this duo program with Fernando Cordas. 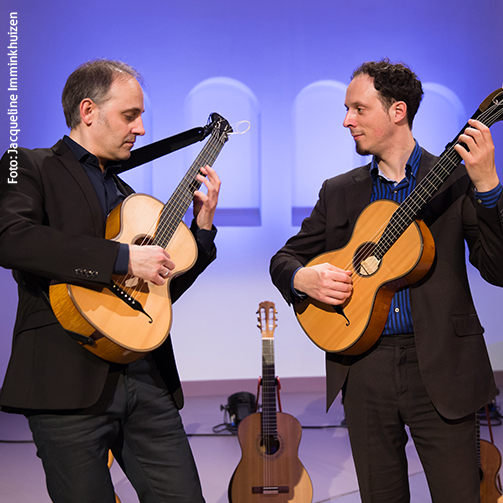 Izhar Elias on Fernando Cordas :
"Fernando turned out to be as much a lover of the nineteenth-century guitar as I am. Moreover, Fernando always thinks and plays from the music and never from the technique. Our basic attitude is the same. From that, a beautiful friendship has also developed."
(Read the interview with Izhar Elias.)

In 2010, Fernando Cordas made his definitive breakthrough when he replaced world-renowned guitarist Pepe Romero in a performance of Joaquin Rodrigo's Concierto de Aranjuez. Since then, he has played with all the major orchestras. Fernando Cordas is also enthusiastically researching the history of the guitar in the nineteenth century. Since September 2014, Cordas has been a teacher at the Royal Conservatory of Music in The Hague.

Travel with us from Schubert's romantic Vienna to the sun-drenched Italy of Morricone and Nino Rota. During the first part of the program, master guitarists Izhar Elias and Fernando Cordas unravel Schubert's enigmatic last piano sonata in a version for two guitars. For the second part of the program, Fernando and Izhar perform the most beautiful gems and virtuosic hits from Italian stage and film history. Enjoy a spectacular opera overture by Donizetti, well-known melodies by Ennio Morricone and Nino Rota, and works by Italian film composer Castelnuovo-Tedesco