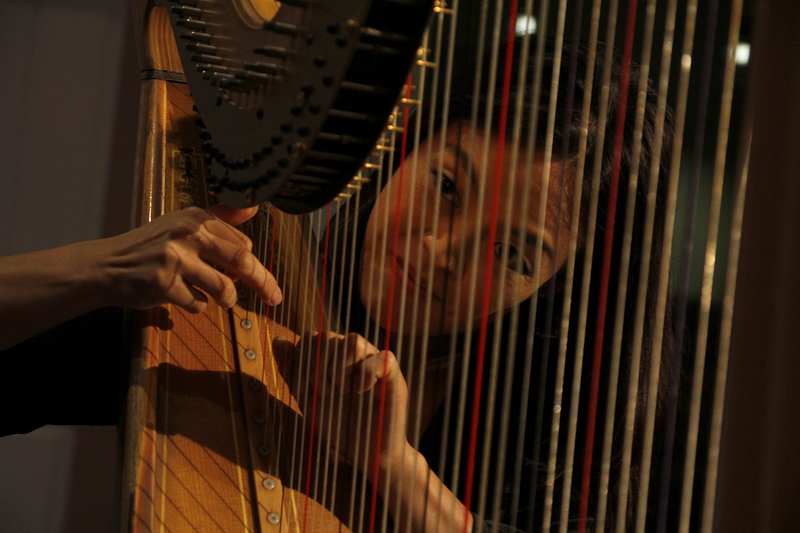 PLEASE NOTE: Lavinia Meijer and Feico Deutekom will play this programme on 19 and 26 January.
If you want to order tickets for the 26th, click here.

Whoever says harp, says Lavinia Meijer. She's one of the best harpists in the world. Great composers, such as Philip Glass, admire the way in which she manages to translate repertoire not originally written for the harp to this instrument. In the Edesche Concert Hall she joins forces with pianist Feico Deutekom. Together they play a selection from Glass' music for the film 'Candyman'. But there's more on the program. Also 'Amelie' and 'The Piano' are films that have all become blockbusters. The same goes for the music. Anyone who can play the piano a bit has played the famous melody by Yann Thiersen from 'Amelie'. Lavinia and Feico play it on harp and piano

There are probably few publishers who have a flourishing career as a concert pianist besides their job. Feico Deutekom is fortunate enough to combine his love of literature and music in a successful career, between publishing and concert stage. Feico regularly plays with various instrumentalists, such as Lavinia Meijer and the violinist Janneke van Prooijen. In 2012 he performed with Lavinia at a concert with Philip Glass in the Rabozaal in Amsterdam. He then made adaptations of Glass's music for a full evening programme with Lavinia and the Attacca Ensemble, which produced two successful tours and another guest performance with Philip Glass himself. Feico and Lavinia Meijer premiered new work by the composer Douwe Eisenga, which was composed especially for them

Pianist Feico Deutekom on Philip Glass:
"I've played quatre mains with him several times. Nice, but exciting. Glass loves surprise and adventure. He doesn't shrink from thinking up something new half an hour before a performance, which still needs to be rehearsed quickly"
(Read the interview with Feico Deutekom.)

Lavinia Meijer gets carte blanche from the Edesche Concert Hall. That's got to be something special! Experience an atmospheric get-together with one of the most famous harpists in the world. Solo and together with pianist Feico Deutekom Lavinia plays pieces that are close to her heart. That varies from music from Glass to film music. A concert with a velvet touch, in which harp and piano come together beautifully.